The Irish monk St. Brendan the Voyager (484-578), born in County Kerry, is reported to have reached the shores of this continent over nine hundred years before Columbus discovered America. Since then, both sailors and scuba divers have claimed St. Brendan as their patron saint – so fitting for this beautiful church that has watched over the activities on the St. Lawrence River for more than a century. The old Rockport families who built the church in 1891 came by skiff, rowboat, and horse and buggy.

They were mainlanders like the O’Connors, Donovans, and Reids as well as islanders like the Senecals who came from Grenadier, and the Hunts from Club Island. Some simply walked across on the ice in winter. Prominent on the cliff in front of the church is the statue of Our Lady of Peace donated by Charles Cornwall’s widow Louise in 1919. After she died in 1939, an electric wire was strung from the Cornwall General Store to illuminate the statue at night as a beacon for mariners. That light still shines on. 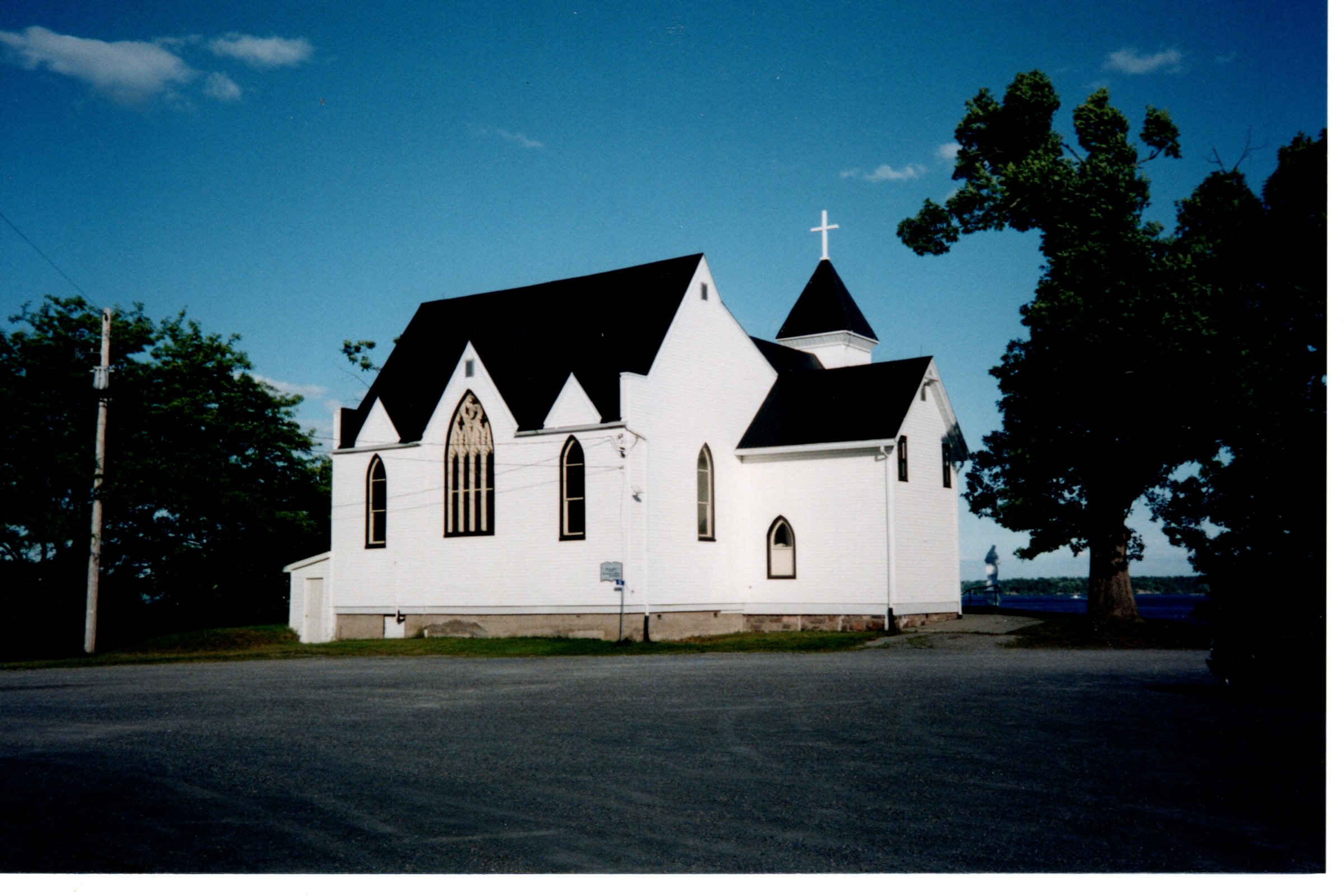 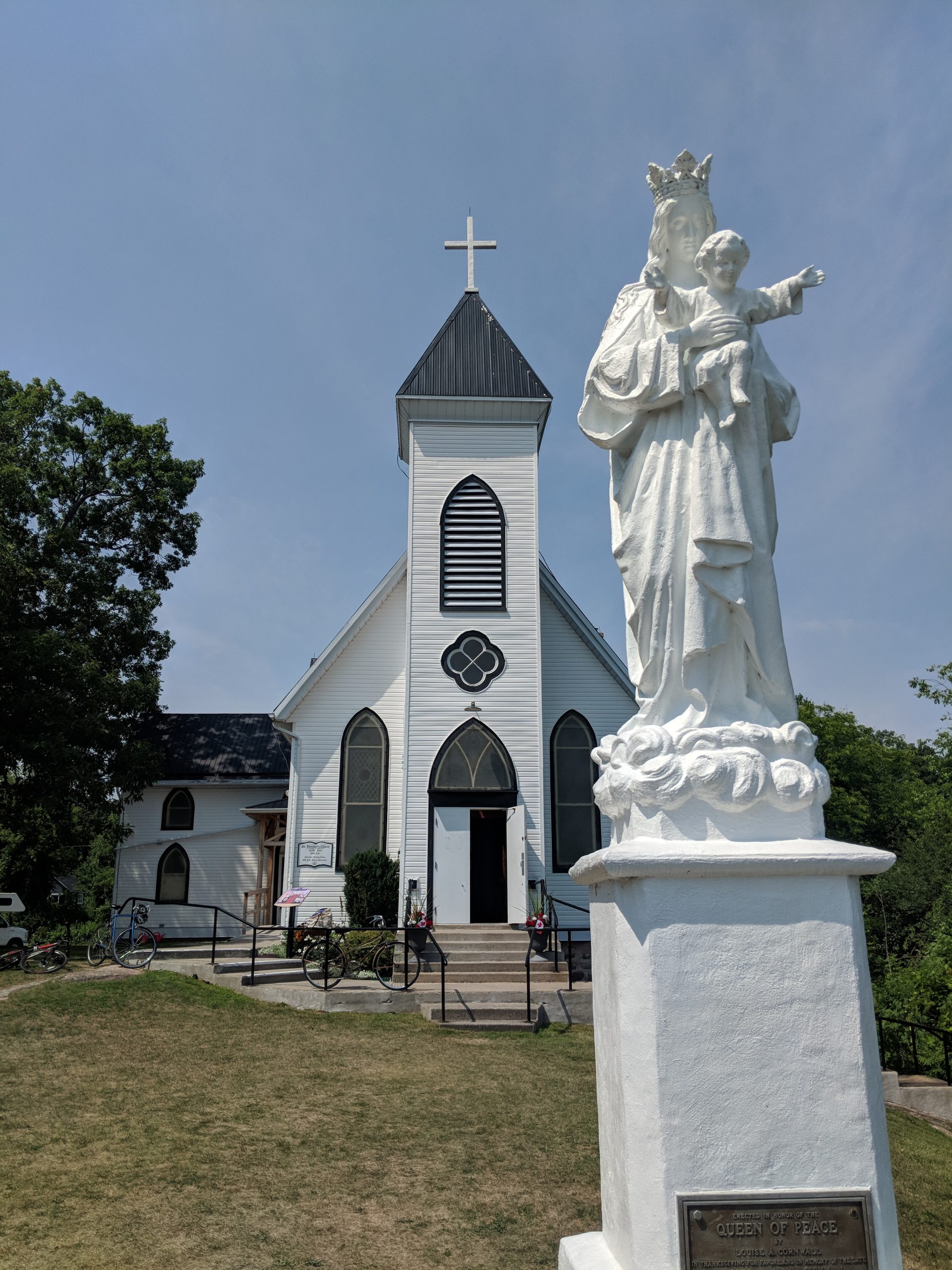 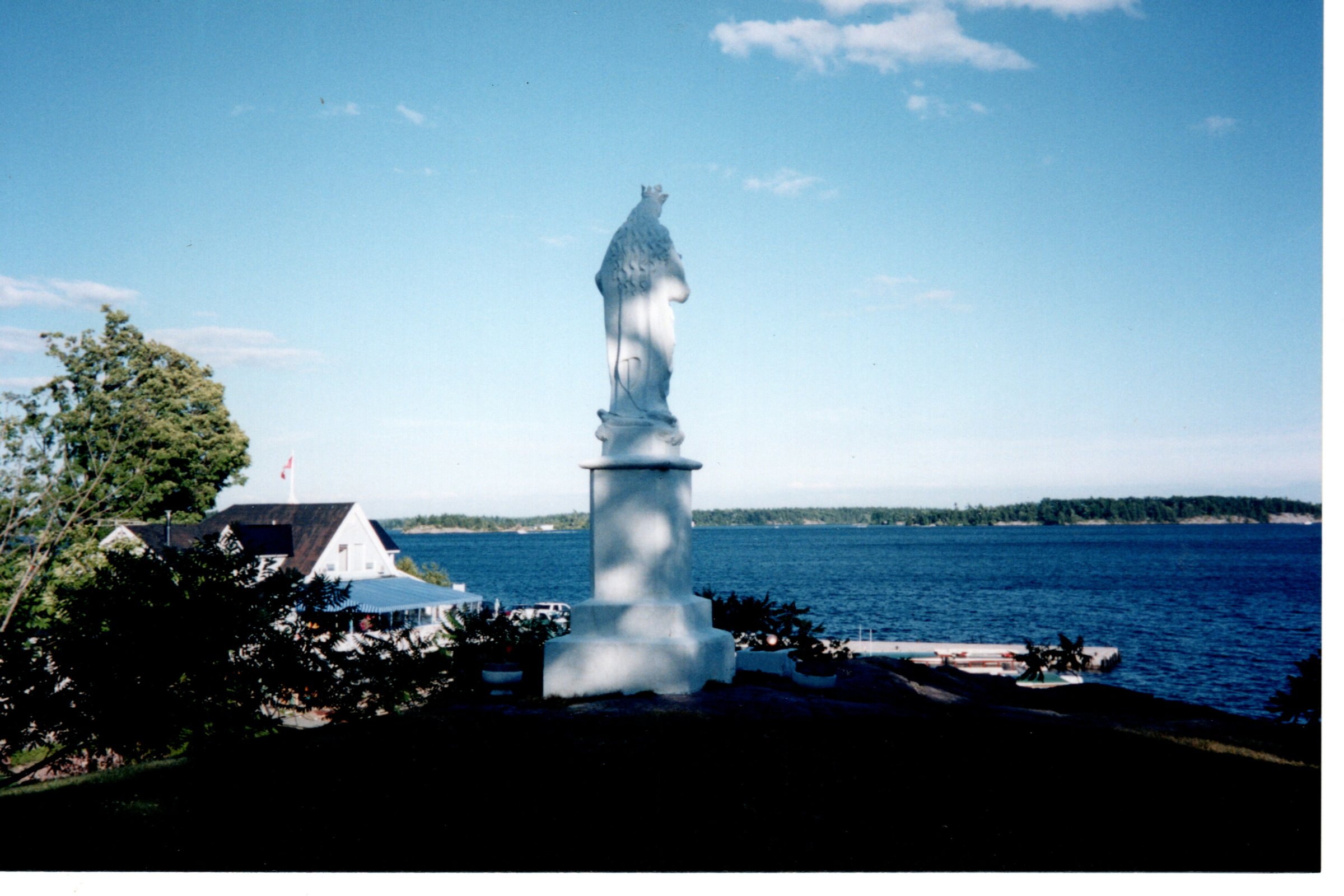 Surveyed in 1788, the Township of Leeds & Lansdowne did not receive any number of Irish Settlers until the 1790’s. In 1846, the Catholic Parish of Gananoque included Gananoque, Brewer’s Mills, Howe Island and Jones Falls. From the brief records it shows that Lansdowne and Jones Falls later combined to make the mission of Lansdowne. In the time of Father James R. Rossiter, who was the priest in Gananoque in 1851, it is said that mass was celebrated in different homes until the year 1875.

Our first church was built on a site just north of today’s present church. It was located just four miles from Lansdowne Village. This was considered the most central point of the Catholic population. Some of the first family names were: McDonald, Donevan, Lappan, O’Grady, Fodey, Sullivan, Gavin, Rape, Bolger, Ivey, O’Conner, Deir and Lynch. After a while it became necessary to build again. The present church was built on a two acre lot that was donated by John Lappan. The parish men worked long and hard hours to complete the church. Records state that on June 23, 1901, the cornerstone of St. Patrick’s Church was laid by Archbishop Gauthier. Later, the cemetery was laid out. In the beginning, Masses could only be held every second Sunday, because Lansdowne and Howe Island were missions. This meant many miles of travelling over poor road conditions for the priest of Gananoque. In September 1932, Archbishop M.J. O’Brien established Lansdowne as a parish with Rockport as their Mission. Father I.F. O’Donoghue was the first resident-pastor. 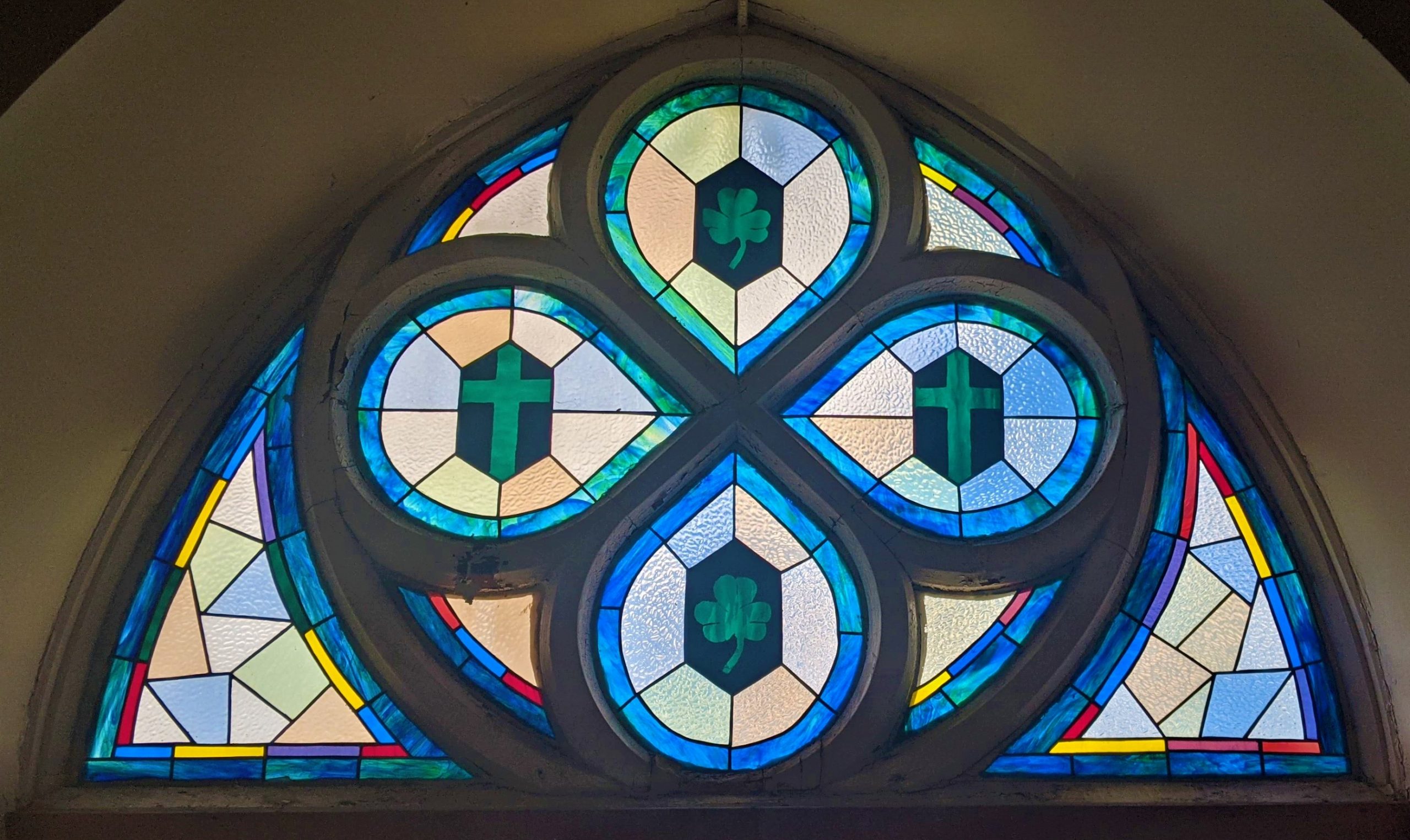 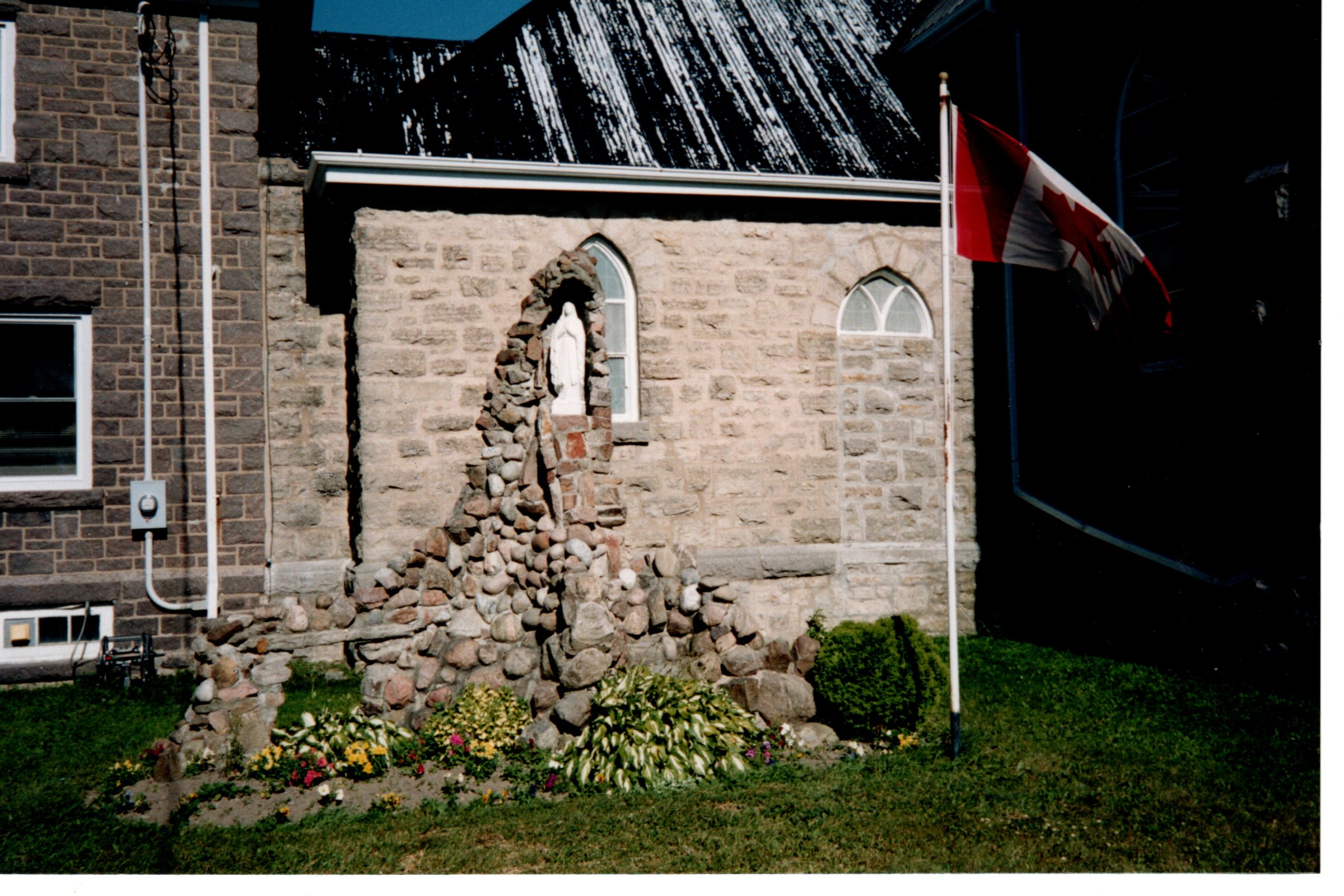 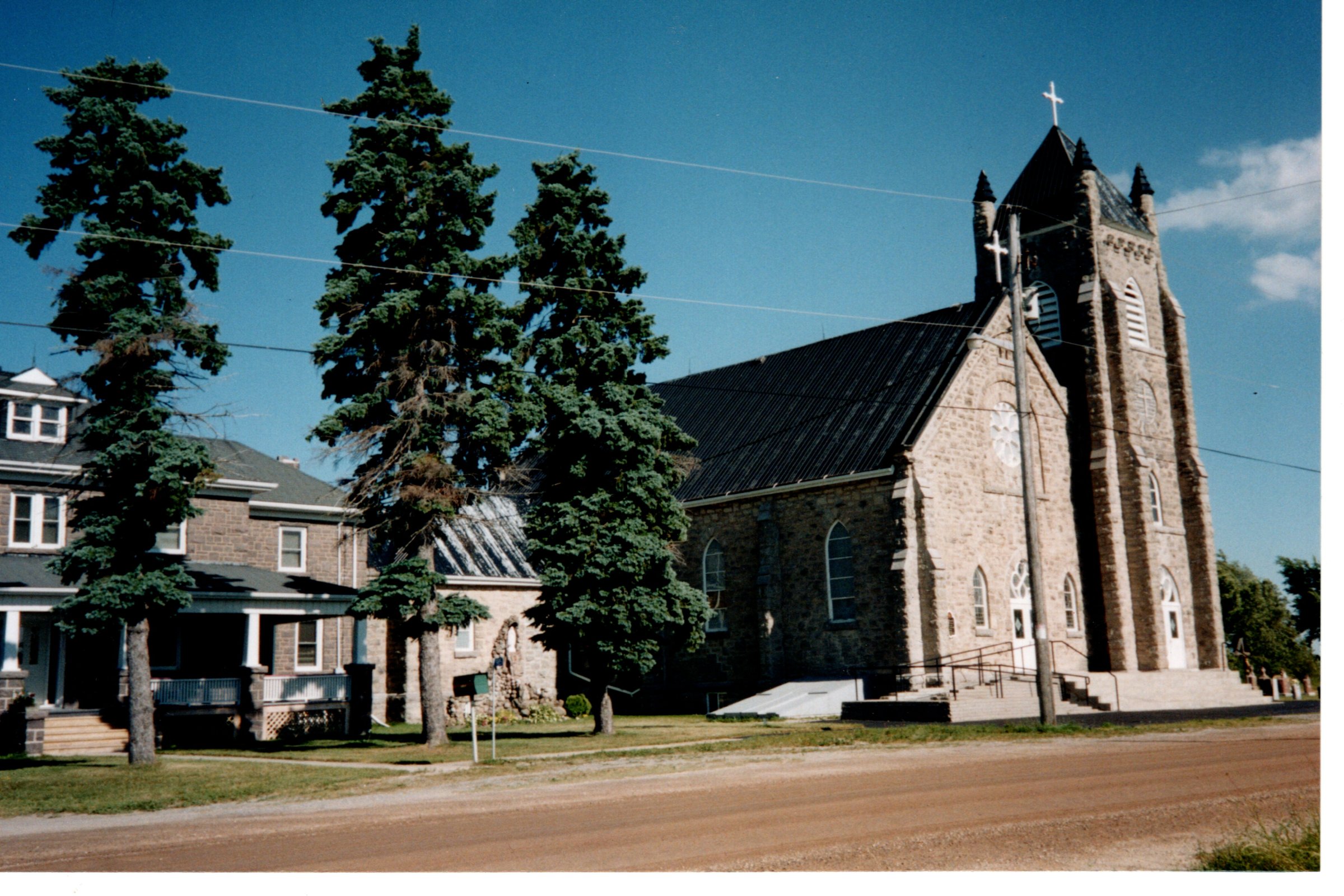 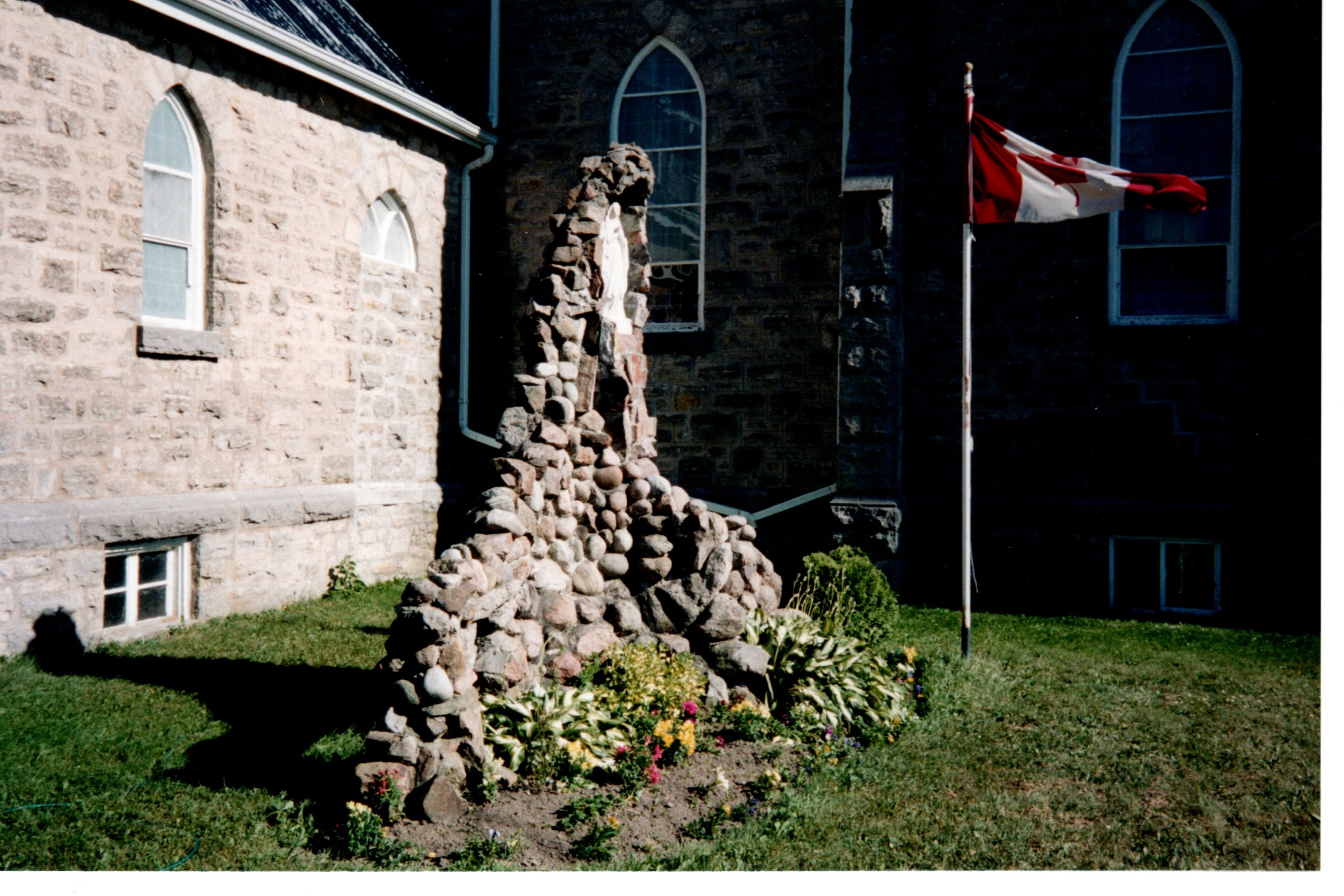 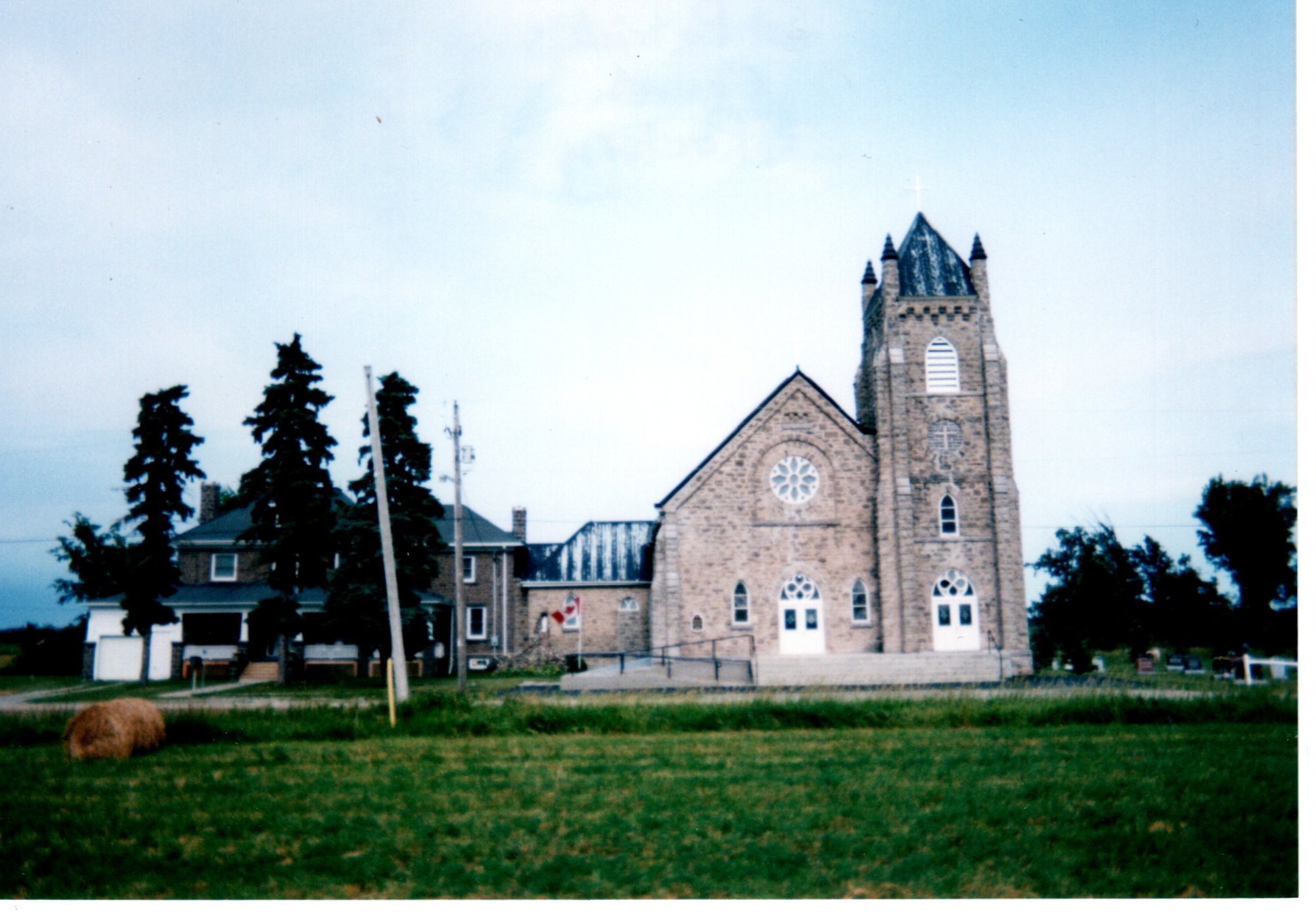 One of Father O’Donoghue’s first task as priest was to build a rectory. The sand for the mortar mix for the rectory came from Frank O’Grady’s farm. With lots of help from many parishioners, the residence was erected and still stands today. In September 1933, the first Catholic Woman’s League was organized in Lansdowne with Mrs. Brennan as organizer. Our second Parish Pastor, Rev. J.J. Collins, bought a cement block building that was formerly known as the Lansdowne Cheese Factory. Rev. Collins had it remodelled into a parish hall. It was opened in November of 1955. That building has served many purposes over the years and still stands. It is currently used as offices for BMD Transportation, owned by Bert and Madolyn McMahon of our Parish. In the early 1980’s, a Marian grotto was built by Gerald O’Grady and the Langton family with field stones from Gerald’s farm. This became the site for outdoor masses. Father Don Cummings along with volunteers and contractors completed a major reconstruction of the basement of St. Patrick’s Church starting in 1989 and finished in 1995 with the completion of the meeting room and hall under the church, which is still in use today. In recent years, it became evident that our cemetery needed to be expanded. Local farmer and parish member Bert Vandenkerkhof donated the property to expand the cemetery a short time before he passed away.

Pastors serving the Parish of St. Patrick’s & St. Brendan’s since 1932